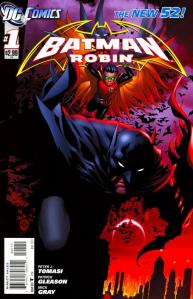 To be honest, this is the first issue that I’ve ever read with Batman and Robin. A kid being subjected to a world of crimes and killings does not entice me on reading it before. But a lot of YA dystopian novel kind of prepared me and set my mind into thinking that this is just ok. And let me just tell you, I’ll be picking up the next issue because I’m interested to know more about this sick kid, son of Batman, great in combat, and he would not even think twice of killing bad guys. The name is Damian Wayne. Some of my favorite lines coming from him are “Life’s a battlefield, father. Good people meet horrible fates the same as the bad ones” and “grief and remorse are a disease of the weak. You wage war and destroy your enemies before they destroy you.” It’s just some lines if you think about it but coming from a 10-year-old kid? Hhhmmnnn

This is also the first time I’ve ever heard of Buddy Baker – Animal Man. So I read this with a clean slate on my head and an open mind. I didn’t even picked it up immediately like Action Comics #1 fresh out of its delivery box. The ravings of other comic enthusiast did and I’m glad I listened to them. At first, the I was distracted by its art. A bit rough for my taste (the first half, just want to clarify that) but the story telling was flawless so I continued reading. The info dump at the beginning was a bold move too but I liked it. It gives me a feel as what and who Buddy Baker is. The dream sequence erases all my doubt to the capacity of the artist to pull this through. Great job there, both the writer and the artist. And the ending was just . . . freaky. Hehehe. I’m definitely gonna pick up the second issue. 🙂

Music captures my heart, it reflects my emotion. Books and comics are my escape, brings me to places that can only be reach by my imagination. In between happens LIFE. I am PINOYPETERPAN.