To be honest, this is the first issue that I’ve ever read with Batman and Robin. A kid being subjected to a world of crimes and killings does not entice me on reading it before. But a lot of YA dystopian novel kind of prepared me and set my mind into thinking that this is just ok. And let me just tell you, I’ll be picking up the next issue because I’m interested to know more about this sick kid, son of Batman, great in combat, and he would not even think twice of killing bad guys. The name is Damian Wayne. Some of my favorite lines coming from him are “Life’s a battlefield, father. Good people meet horrible fates the same as the bad ones” and “grief and remorse are a disease of the weak. You wage war and destroy your enemies before they destroy you.” It’s just some lines if you think about it but coming from a 10-year-old kid? Hhhmmnnn 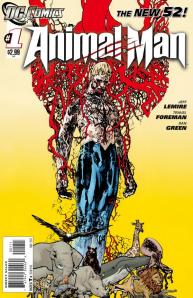 This is also the first time I’ve ever heard of Buddy Baker – Animal Man. So I read this with a clean slate on my head and an open mind. I didn’t even picked it up immediately like Action Comics #1 fresh out of its delivery box. The ravings of other comic enthusiast did and I’m glad I listened to them. At first, the I was distracted by its art. A bit rough for my taste (the first half, just want to clarify that) but the story telling was flawless so I continued reading. The info dump at the beginning was a bold move too but I liked it. It gives me a feel as what and who Buddy Baker is. The dream sequence erases all my doubt to the capacity of the artist to pull this through. Great job there, both the writer and the artist. And the ending was just . . . freaky. Hehehe. I’m definitely gonna pick up the second issue. 🙂

The new Spidey, Miles Morales, is out now. Amidst the release of DC’s new 52, I think this issue will not go unnoticed. I know that the press release of the half-black, half-latino web slinger caused a havoc to Peter Parker fans but I think after reading Spider-Man #1, Miles Morales would do just fine.

What do we know about Miles Morales:

We do know that Miles Morales is poor. His parents are good people who wants the best for him so they take a chance in a lottery that could win him a slot to a good school. Sara Pichelli could really draw emotions and with that we could say he is a meek and humble kid. After winning a slot Miles said “It shouldn’t – – all these other kids. Should it be like this?”, we already knew that he’s got a good sense of what’s right and wrong.

This issue did not start with web-slinging, crime-fighting, cars-exploding panels and I like it.  Brian Michael Bendis takes time to introduce you to what environment Miles was in. It focuses on his family and on how it would affect him as to what he would become, I think :P. You could feel the warmth and love of a parent to their son on this issue. Bendis is making us know that the family would play an integral part to this series.

Sara Pichelli should also be praised with how this first issue turned out. She accomplished to put real emotions to the characters on how exactly they should look like at every panel. Another one is on how unique every character was drawn. It shows that she really put time on the details. The color was also spot on. It helps to transcends what Pichelli has drawn.

It was a great first issue and it would be a mistake to not buy it because you don’t want Marvel’s decision of killing Peter Parker. With just the first issue, Bendis already got me caring and rooting for Miles Morales. Great job guys! 🙂

It’s been a great start for the DC’s New 52. I saw a lot of comics enthusiast grabbing a copy of the new titles right out of its delivery box (uhm, am I one of them?) :). Here are some of my comments to the ones that I’ve bought. 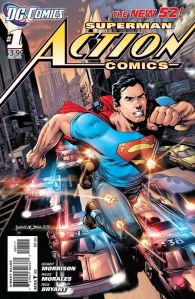 I’m not really a Superman fan but I would have to say that Grant Morrison started Action Comics with a bang. DC gave him Action Comics and he delivered. It started with a chase, and it kinda felt a little bit Batman-ish, not in a bad way but just different from what I was expecting before reading it. I never thought I would hear Superman say “Catch me if you can” but yup, he said it. I still don’t know where he would go (Morrisson) with it but that would be one of the reasons why I would be reading the next issue. To see what he would do next with it. A panel after panel full of action and that is enough reason for you to grab a copy. 🙂

Before reading this, the only thing I know about Superboy was what I’ve watched from the “Young Justice” cartoon series. It somehow did nothing to make me interested to pick up a comic book about him. With the release of DC’s New 52, many where saying that Superboy is the one that you should not miss. I was surprised as to how good Scott Lobdell executed the story. He gave enough background for new readers and at the same time, creating something new for the Superboy fans. The last page makes me so excited as to what would happen in the next issue!

This is my long overdue comment on the Justice League issue #1. Comic Bloggers are clamoring that the first issue of Justice League did not live up to readers’ expectation. With all the hype and it being the first of the DC’s New 52, much has been said. Some says that the story should start where the Justice League already exists or the issue should have been a full story. I would have to disagree to them. I think Geoff John starts a very solid 1st issue here. If you’re looking for a full story, you should have bought a graphic novel instead. You could not expect that the writer could squeeze all the characters there on the first issue. This is the way to go, a scene where he makes a dialogue with two or even three of the characters as a way of introduction. The readers, specially the new ones, would have a feel of who the characters are. Like what he did with Batman and Green Lantern, who would disagree to me that it was an awesome banter between the two characters? Yup, I knew it, NO ONE. If he could sustain that great writing all through out, I’m quite sure that Justice League would sell like hotcakes in all comic stores. With that said, I think it is worth it to grab the second issue of the Justice League.

So there you go. I did put a part I at the title and hopefully I would be able to finish writing some of my comments to the other comics that I’ve got during the first 2 weeks of DC’s New 52. Till next time, I mean next post. 🙂 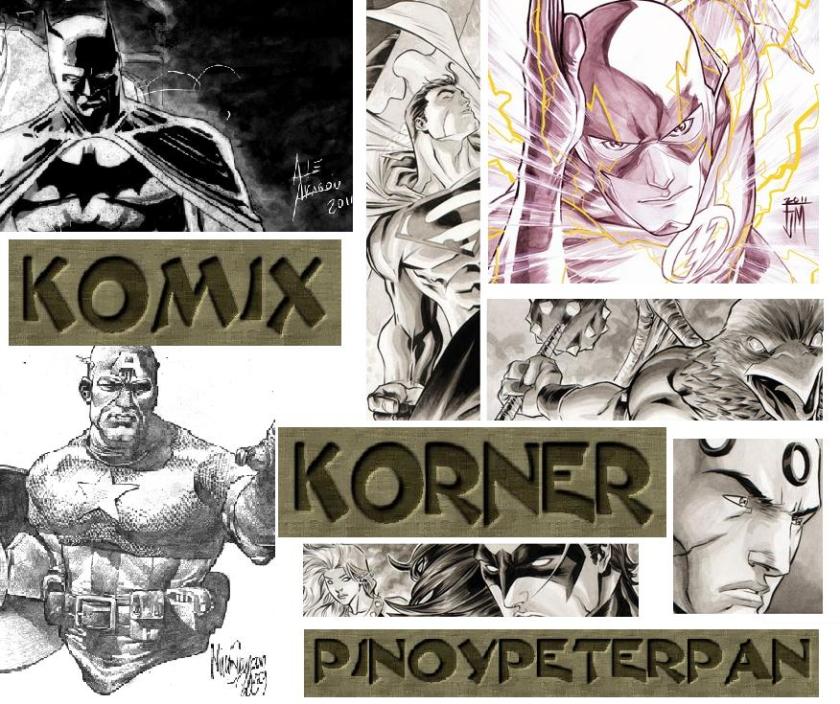 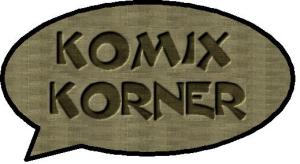 I seriously tried to put a reason as to why I read comics but still the bottom line is “I like them comic books” :). As a show of love to the world of comics, every week I would TRY (emphasis on the word try) to post comments about the ones that I’ve read. Not that long, and not as thorough as what I’ve read on other blogs (serious comic bloggers) but my own point of view as to how I see it. You might see a lot of the DC’s new 52 because that’s the one that I’ll be anticipating this coming months. So there you go and for the lack of better words to end it, I’ll just say ta ta!

NOTE: The sketches are not mine (obviously). It is available through the net, and I do not claim any of it. 🙂

I’ve been excited for about two months now because of this. DC Comics  would re-launch 52 of their titles back to issue #1. For a new comic collector, this is good news. I would have to admit that before, I would prefer buying a graphic novel than grab a copy of one of those on-going monthlies (Oh good, I got The Flash #163! Now I have to look for #01-162).

Check out the trailer of DC’s New 52:

If you wanted a complete list of all the titles that DC would re-launch, comicbookresources.com got it covered. Click here . 😉

As for me, I’m planning to collect the following comics listed below. So from time to time, I might post some reviews or comments about the said comics. 🙂

That’s it. I hope that the DC’s new titles I’m planning to collect would not be just another sales idea gone bad. I already got a copy of the Justice League #1, and I’m planning to write something about it this weekend. Cheers! 🙂

Music captures my heart, it reflects my emotion. Books and comics are my escape, brings me to places that can only be reach by my imagination. In between happens LIFE. I am PINOYPETERPAN.